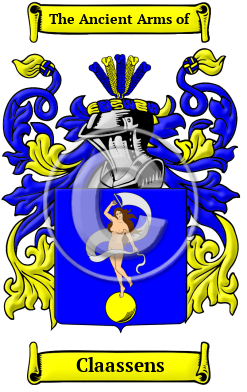 The name Claassens was first used by the people of the German province of Westphalia, which lay in the area between the Rhine and Wesser rivers. It is a patronymic name, derived from the given name of the father of the original bearer. Along with metronymic names, which come from the name of the mother of the bearer, patronymics were one of the most popular early German name types. Claassens was derived from the baptismal name Clausen, which is a form of the name Nicholas. The given name Nicholas, which means people's victory, was popular among Christians throughout Europe in the Middle Ages.

Early Origins of the Claassens family

The surname Claassens was first found in Westphalia, where the family made a considerable contribution to the feudal society which shaped modern Europe. The family branched into several houses, all of which played important roles in the local political conflicts which forged the nation.

Early History of the Claassens family

This web page shows only a small excerpt of our Claassens research. Another 176 words (13 lines of text) covering the years 1676, 1786, 1850, 1622 and 1678 are included under the topic Early Claassens History in all our PDF Extended History products and printed products wherever possible.

Many cultural groups lived in the German states in medieval times. Each had its own dialect and traditions, and unique variations of popular names. Low German, which is similar to contemporary Dutch, was spoken in Westphalia. German names are characterized by additions such as regional suffixes and phrases that tell something about the origin or background of its original bearer. Further contributing to the variation in German names was the fact that there were no spelling rules in medieval times: scribes recorded names according to their sound. The recorded spelling variations of Claassens include Klassen, Klasse, Klass, Klasen, Klase, Klas, Classen, Classe, Class, Clasen, Clase, Clas, Klasing, Klaasen, Klaasen, Claasen, Klaase, Claase, Klaas and many more.

Notables of the period with the name Claassens were Daniel Clasen, in Latin Danielis Clasenius or Clasenus (1622-1678), a German political theorist, religious scholar, and classicist; and...
Another 27 words (2 lines of text) are included under the topic Early Claassens Notables in all our PDF Extended History products and printed products wherever possible.

Migration of the Claassens family

After 1650, thousands of German settlers came to North America to escape the religious persecution and poverty that wracked Europe and to make the most of the opportunity to own their own land in a new country. They settled across the United States in Pennsylvania, Texas, New York, Illinois, and California, and in Canada in Ontario and on the fertile plains of the prairie provinces. Among them: Rosina Clasing, who arrived in Philadelphia in 1733. Engelbert Classen came to Philadelphia in 1773; while Heinrich Klasing settled in Texas in 1846.