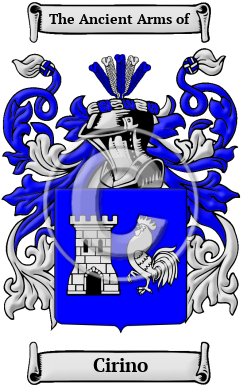 The Cirino surname is derived from the place name Cirillo, located in south central Italy. As such, it is classed as a local name, derived from a place-name where the original bearer once resided or held land. Often Italian local surnames bore the prefix "di," which signifies emigration from one place to another, but does not necessarily denote nobility.In the local dialect of Cirillo, the place-name is pronounced Cercelle, while natives are called Circellese. Alternatively, the surname Cirillo may come from a personal name, ultimately derived from the Greek mythological name Circe.

Early Origins of the Cirino family

The surname Cirino was first found in the year 1153, when records show Filippo Ciria of Cremona, who was made the Bishop of Capua.

Early History of the Cirino family

This web page shows only a small excerpt of our Cirino research. More information is included under the topic Early Cirino History in all our PDF Extended History products and printed products wherever possible.

Surnames that originated in Italy are characterized by an enormous number of spelling variations. Some of these are derived from regional traditions and dialects. Northern names, for instance, often end in "o", while southern names tend to end in "i". Other variations come from the fact the medieval scribes tended to spell according to the sound of words, rather than any particular set of rules. The recorded variations of Cirino include Cirillo, Ciri, Ciraulo, Ciraula, Cirauli, Cirilli, Cirilla, Cirilo, Cirili, Cirila, Ciriaci, Ciria, Ciriani, Cirotto, Cirotti, Cirello, Cirenei, Ciringhelli, Cirini, Cirino and many more.

Prominent among bearers of this family in early times was Bernardo Cirillo, an author in L'Aquila born in 1500; Francesco Cirillo of Naples was a famous musician around 1630; Giulio Cirello was a talented painter in Padua around the same...
Another 40 words (3 lines of text) are included under the topic Early Cirino Notables in all our PDF Extended History products and printed products wherever possible.

Cirino migration to the United States +

Some of the first North American settlers with Cirino name or one of its variants:

Cirino Settlers in United States in the 19th Century

Cirino Settlers in United States in the 20th Century