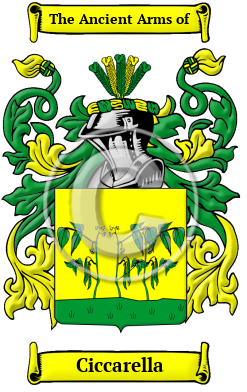 The surname Ciccarella came from the personal name Cicco, which is found in southern Italy and the Venetian region as a popular and affectionate form of the name Francesco.

Early Origins of the Ciccarella family

The surname Ciccarella was first found in Piedmont (Italian: Piemonte, Piedmontese and Occitan: Piemont.) Earliest records date back to the year 1112, when Pompeo Cicala was a valiant soldier in the city of Genoa.

Early History of the Ciccarella family

This web page shows only a small excerpt of our Ciccarella research. Another 26 words (2 lines of text) covering the years 1493, 1673, 1686, 1623, 1751, 1780 and 1804 are included under the topic Early Ciccarella History in all our PDF Extended History products and printed products wherever possible.

Prominent among members of the family was Andrea Ciccione, Italian sculptor and architect born in Naples in the first part of the 15th century; Ludovico Cicognara, who was mayor of Sassuolo in 1493; Antonio Ciccarelli of Foligno was the secretary of Pope Boniface IX during the 16th century; Girolamo Cicala of Lecce was famous for his Latin poetry; Francesco-Bernardino Cicala, also of Lecce, was a talented poet who specialized in tragic works; Vincenzo Ciceri of Como was made count of Cerro around...
Another 81 words (6 lines of text) are included under the topic Early Ciccarella Notables in all our PDF Extended History products and printed products wherever possible.

Migration of the Ciccarella family

Early North American records indicate many people bearing the name Ciccarella were among those contributors: Liberato Diciocco, age 27, who arrived at New York on Dec. 20, 1882, aboard the "Italia"; Bernardo Cichero, who arrived in Philadelphia, Pennsylvania, in 1855.