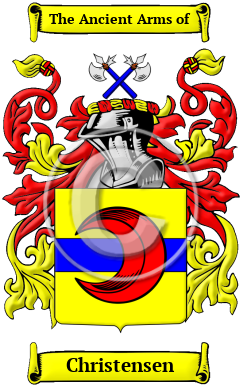 The Christensen surname is a patronymic created from the personal name Christen, which comes ultimately from the Latin Christianus "follower of Christ".

Early Origins of the Christensen family

The surname Christensen was first found in Denmark, where the name contributed greatly to the development of an emerging nation which would later play a large role in the tribal and national conflicts of the area. In later years the name branched into many houses, each playing a significant role in the local social and political affairs. Christensen is also connected to several place names in Denmark. Both main branches of this family name were elected to the nobility. While the surname can be of multiple origins, today there are twice as many that call Denmark their homeland versus Norway.

Early History of the Christensen family

This web page shows only a small excerpt of our Christensen research. Another 59 words (4 lines of text) are included under the topic Early Christensen History in all our PDF Extended History products and printed products wherever possible.

More information is included under the topic Early Christensen Notables in all our PDF Extended History products and printed products wherever possible.

Christensen migration to the United States +

Christensen Settlers in United States in the 19th Century

Christensen Settlers in United States in the 20th Century

Christensen Settlers in New Zealand in the 19th Century

Historic Events for the Christensen family +