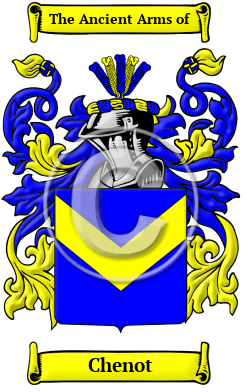 Early Origins of the Chenot family

The surname Chenot was first found in Burgundy (French: Bourgogne), an administrative and historical region of east-central France where the family has been known from ancient times.

The family goes back to Louis Chenu in 1481. A branch of this family was established in the sixteenth century and goes back to Pierre, a horseman, who was also Lord of Charantonay in the French region of Berry and part of Ravières, Nuits-sous-Ravières, and Villiers-les-Haut in 1533. His son Claude, Lieutenant of fifty soldiers who was made a Knight of the King's Order, was killed at the siege of Poitiers in 1569.

Their descendants have carried the titles of Barons of Nuits-sous-Ravières and Fulvy. Other branches of the family were formed and were mostly represented by members who served in the military. One of the branches was even in charge of a military school in 1766. [1]

Early History of the Chenot family

This web page shows only a small excerpt of our Chenot research. More information is included under the topic Early Chenot History in all our PDF Extended History products and printed products wherever possible.

Another 29 words (2 lines of text) are included under the topic Early Chenot Notables in all our PDF Extended History products and printed products wherever possible.

Migration of the Chenot family

Some of the first settlers of this family name or some of its variants were: M. Chenou, aged 44; settled in New Orleans in 1823.