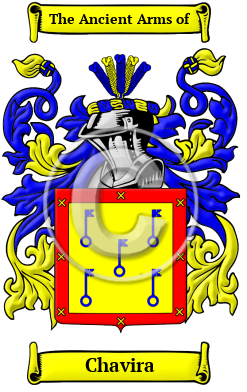 The prestigious surname Chavira originated in Spain, a country which has figured prominently in world affairs for hundreds of years.

Early Origins of the Chavira family

The surname Chavira was first found in Galicia, in northwestern Spain.

Early History of the Chavira family

This web page shows only a small excerpt of our Chavira research. Another 95 words (7 lines of text) covering the years 1370 and 1815 are included under the topic Early Chavira History in all our PDF Extended History products and printed products wherever possible.

Spelling variations of this family name include: Chávez, Chavez, Chaves and others.

Another 46 words (3 lines of text) are included under the topic Early Chavira Notables in all our PDF Extended History products and printed products wherever possible.

In the United States, the name Chavira is the 9,590th most popular surname with an estimated 2,487 people with that name. [1]

Migration of the Chavira family

Some of the first settlers of this family name or some of its variants were: Juan Chaves, who served with Pedro de Alvarado and who founded the settlement of Gracias a Dios in 1533. Also of note was Nuflo de Chaves, who voyaged to the New World with Alvar Nú.