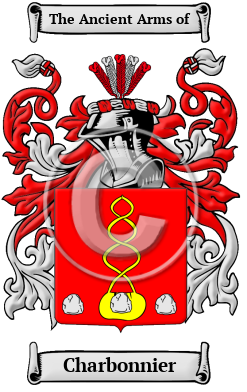 Early Origins of the Charbonnier family

The surname Charbonnier was first found in Périgord, where this illustrious family once lived.

Over the centuries, this honorable family was well established in the region of Merle and several of its members distinguished themselves by their contribution to the communities where they lived and were rewarded with land grants, titles, and credentials. Thus Carbonnières barons were granted the right to manage the lands and territories of Merle, including the Abbey of Saint Geraud of Aurillac, and received the title of Vicomte de Turenne in the twelfth century.

The right and privilege of being the protector of a church or an abbey gave special rights and responsibilities to the family who would argue over the generations.

Olivier Charbonneau, born in 1611, married Marie Garnier, born in 1626, at La Rochelle, France. They travelled together to the New World in 1659 and settled near Pointe-aux-Trembles. In Quebec Olivier worked as a miller and in construction at a water mill. They had five children that carried on the distinguished name of Charbonneau in Canada. [1]

Early History of the Charbonnier family

This web page shows only a small excerpt of our Charbonnier research. Another 129 words (9 lines of text) covering the years 1070, 1258, 1248, 1509 and 1786 are included under the topic Early Charbonnier History in all our PDF Extended History products and printed products wherever possible.

More information is included under the topic Early Charbonnier Notables in all our PDF Extended History products and printed products wherever possible.

In France, the name Charbonnier is the 401st most popular surname with an estimated 10,647 people with that name. [2]

Migration of the Charbonnier family

Historic Events for the Charbonnier family +