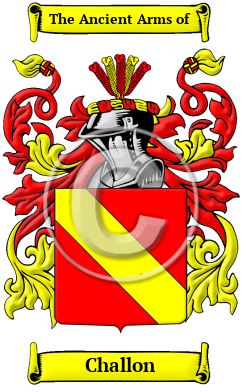 Early Origins of the Challon family

The surname Challon was first found in Burgundy (French: Bourgogne) where John, Count of Chalon (1190-1267) called the Old (l'Antique), was a French nobleman. He was the son of Stephen III of Auxonne and Beatrice, Countess of Châlon. He had three wives and 16 children. Amoung them was John I of Châlon (1259-1316), seigneur d'Arlay, founder of the Châlon-Arlay branch of the house of Ivrea.

Early History of the Challon family

Another 34 words (2 lines of text) are included under the topic Early Challon Notables in all our PDF Extended History products and printed products wherever possible.

Challon migration to the United States +

Challon Settlers in United States in the 18th Century

Challon Settlers in Australia in the 19th Century

Challon Settlers in New Zealand in the 19th Century