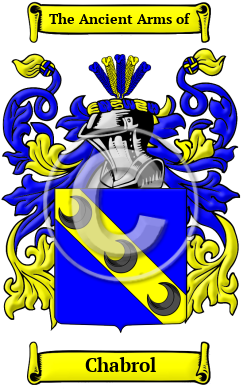 The name Chabrol was derived from the Old French word "chevre," which derives in turn from the Latin "capra," which means "goat." As a surname, Chabrol was generally though to have been an occupational name for a goatherd.

Early Origins of the Chabrol family

The surname Chabrol was first found in Burgundy (French: Bourgogne), an administrative and historical region of east-central France where the ancestors of the family dates back to the last years of the Holy Roman Empire.

Early History of the Chabrol family

This web page shows only a small excerpt of our Chabrol research. Another 99 words (7 lines of text) covering the years 1100, 1170, 1238, 1386, and 1489 are included under the topic Early Chabrol History in all our PDF Extended History products and printed products wherever possible.

More information is included under the topic Early Chabrol Notables in all our PDF Extended History products and printed products wherever possible.

Migration of the Chabrol family

Some of the first settlers of this family name or some of its variants were: Joseph Chevrier who married Madelaine Cholet in 1761 at Pte-Claire.