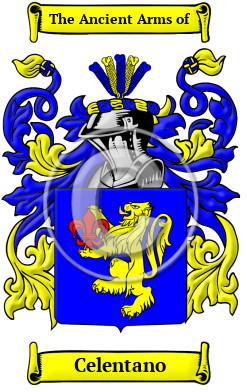 Early Origins of the Celentano family

The surname Celentano was first found in at Bari in Apulia, capital city of Bari; it contains the Cathedral of S. Sabino which was begun in 1034. In Roman times it was the junction between the coast road and Via Traiana. Its harbor is mentioned back in 180 B.C. It was a crusader town occupied by the Norman Robert Guiscard in 1071. It later acquired prosperity under Frederick II. In those ancient times only persons of rank, the podesta, clergy, city officials, army officers, artists, landowners were entered into the records. To be recorded at this time, at the beginning of recorded history, was of itself a great distinction and indicative of noble ancestry.

Early History of the Celentano family

This web page shows only a small excerpt of our Celentano research. Another 99 words (7 lines of text) covering the year 1705 is included under the topic Early Celentano History in all our PDF Extended History products and printed products wherever possible.

More information is included under the topic Early Celentano Notables in all our PDF Extended History products and printed products wherever possible.

In the United States, the name Celentano is the 17,007th most popular surname with an estimated 2,487 people with that name. [1]

Celentano migration to the United States +

Celentano Settlers in United States in the 20th Century