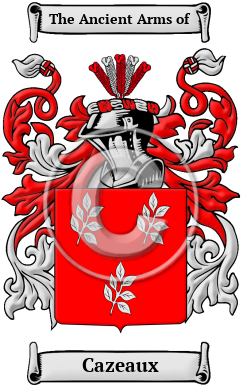 Early Origins of the Cazeaux family

The surname Cazeaux was first found in Ile-de-France.

Early History of the Cazeaux family

Notable amongst the family was Jean F. Caze, who was general treasurer of finances of the Bureau of Aix-en-Provence in 1633; Jean-Élie, Knight of Caseau, was camp Marshall in 1717; Jean-André Cazalet was a chemist in Angles in 1753; the Cazin family was known for its many artists; Jean-Charles Cazin was a painter, engraver...
Another 53 words (4 lines of text) are included under the topic Early Cazeaux Notables in all our PDF Extended History products and printed products wherever possible.

Cazeaux migration to the United States +

Cazeaux Settlers in United States in the 19th Century