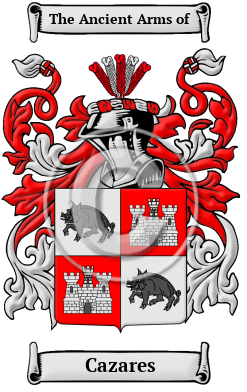 Early Origins of the Cazares family

The surname Cazares was first found in Castile, in north central Spain, although the name may have originated from various other places in the regions of Galicia, the Basque country or Andalucia.

Early History of the Cazares family

This web page shows only a small excerpt of our Cazares research. Another 136 words (10 lines of text) covering the years 1493 and 1629 are included under the topic Early Cazares History in all our PDF Extended History products and printed products wherever possible.

Spelling variations of this family name include: Casares, Casarez, Casare, Cazares and others.

More information is included under the topic Early Cazares Notables in all our PDF Extended History products and printed products wherever possible.

In the United States, the name Cazares is the 4,911st most popular surname with an estimated 4,974 people with that name. [1]

Migration of the Cazares family

Some of the first settlers of this family name or some of its variants were: Antonio De Casares and his wife Isabel de Ojeda de Casares who settled in New Spain in 1599. Later settlers included Felix Casares who immigrated to Puerto Rico in 1836..