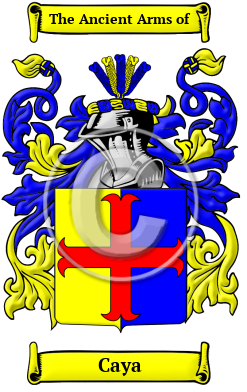 Noble surnames, such as Caya, evoke images of the ancient homeland of the French people. The original bearer of the name Caya, which is a local surname, once lived, held land, or was born in the beautiful region of Picardy. In France, hereditary surnames were adopted according to fairly general rules and during the late Middle Ages, names that were derived from localities became increasingly widespread. Local names originally denoted the proprietorship of the village or estate.

Early Origins of the Caya family

The surname Caya was first found in Picardy (French: Picardie.)

Early History of the Caya family

Notable amongst the family name at this period was Jean Cayart, born in La Capelle in 1645 who was an engineer; the Caillau family produced two principal county magistrates of Mans in 1658 and 1664, councilors of this city, three lawyers at the Parisian parliament, and many officers; the name Caillaux was distinguished in Berry, where there was a principal county magistrate of Brouges in 1650; of the same name were some magistrates of Nantes in 1636 and 1650. The Cailhaut of La Theysserie of Nantes produced a member of the sovereign council of New France (Canada), who died in 1673...
Another 120 words (9 lines of text) are included under the topic Early Caya Notables in all our PDF Extended History products and printed products wherever possible.

Migration of the Caya family

Some of the first settlers of this family name or some of its variants were: 20 settlers of the lineage who arrived from France onto Canadian shores between 1600 and 1900. Among early immigrants were Catherine Cayer, who married in Quebec in 1730.