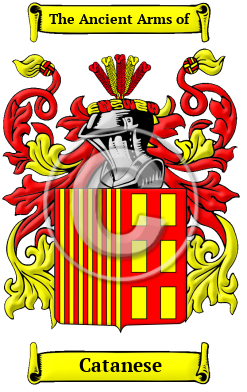 The Catanese family can trace its noble origins to the Italian region of Piedmont. Although people were originally known only by a single name, it became necessary for people to adapt a second name to identify themselves as populations grew and travel became more frequent. The process of adopting fixed hereditary surnames was not complete until the modern era, but the use of hereditary family names in Italy began in the 10th and 11th centuries. Italian hereditary surnames were developed according to fairly general principles and they are characterized by a profusion of derivatives coined from given names. Although the most traditional type of family name found in the region of Piedmont is the patronymic surname, which is derived from the father's given name, local surnames are also found. Local names, which are the least frequent of the major types of surnames found in Italy, are derived from a place-name where the original bearer once resided or held land. Often Italian local surnames bore the prefix "di," which signifies emigration from one place to another, but does not necessarily denote nobility.

The family lived in Catani, a province located at the foot of Mount Etna, on the Gulf of Catani. In the 8th century BC, the province of Catani was founded by the Greeks and it became the Athenian base of operations against Syracuse in 432 BC. In the 9th century, the province was taken by the Saracens and then by the Normans in 1090.

Early Origins of the Catanese family

The surname Catanese was first found in the Piedmont and Tuscany areas of Italy. Earliest records date back to the 10th century in the city of Genoa, where members of the family were landowners of Voragine, Mazzone, Faggiolo, and Lemno.

The surname was registered around this time in the cities of Pavia, Milan, Rome, Prato, Florence, Bologna, Genoa, and on the island of Sicily.

The Cotone branch held the lordship of Cotone, Montorgiali and Matignato, and gave two grand masters of Malta, all before 1464. They resided in supreme magistratures. The family was widespread in Sicily, especially in Palermo where it has at its base an original nickname or trade name formed from the Sicilian cuttuni "cotton." [1] Another branch was originally from France, and transplanted to Messina where in the county of Bavuso, they had established a branch of the family in Palermo, adorned by Philip IV of the title of Prince of Castelnuovo in 1623. [2]

Early History of the Catanese family

This web page shows only a small excerpt of our Catanese research. Another 119 words (8 lines of text) covering the years 1442, 1590, 1600, 1755 and 1770 are included under the topic Early Catanese History in all our PDF Extended History products and printed products wherever possible.

Italian surnames come in far more variations than the names of most other nationalities. Regional traditions and dialects are a decisive factor in this characteristic. For example, northern names tend to end in "o", while southern in "i". Also important, but not unique to Italy, was the fact that before dictionaries and the printing press most scribes simply spelled words according to their sounds. The predictable result was an enormous number of spelling variations. The recorded spellings of Catanese include Catani, Catania, Catanese, Cataneo, Catanea, Catanoso, Catanei, Catanio and many more.

Prominent among members of the family was Paolo Catania of Monreale, a priest in 1590; Francesco Catanio was a painter in Ferrara in 1600; Francesco Maria Catani was...
Another 28 words (2 lines of text) are included under the topic Early Catanese Notables in all our PDF Extended History products and printed products wherever possible.

Migration of the Catanese family

Some of the first North American settlers with Catanese name or one of its variants: