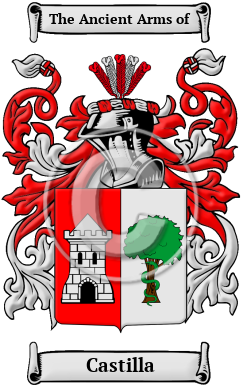 The name Castilla is derived from the Late Latin word "castellum," which meant a fortified building (a castle), a set of buildings or even a village. The region of Castilla in central Spain, an independent kingdom from the 11th to the 16th century, was so named because of the many castles located there.

Early Origins of the Castilla family

The surname Castilla was first found in the mountainous area of Santander, in the northwestern region of the Iberian peninsula.

Early History of the Castilla family

This web page shows only a small excerpt of our Castilla research. Another 116 words (8 lines of text) covering the years 1699, 1760, 1757, 1760, 1602 and 1656 are included under the topic Early Castilla History in all our PDF Extended History products and printed products wherever possible.

Spelling variations of this family name include: Castillo, Castillos, Castel, Castello,Castilla and others.

Prominent among members of the family Felix Castello (1602-1656), a Spanish painter of the Baroque period, painted for the chapel of Santo Cristo de la Paciencia in the Convent of...
Another 30 words (2 lines of text) are included under the topic Early Castilla Notables in all our PDF Extended History products and printed products wherever possible.

Castilla migration to the United States +

Castilla Settlers in United States in the 16th Century

Castilla Settlers in United States in the 19th Century

Castilla Settlers in United States in the 20th Century