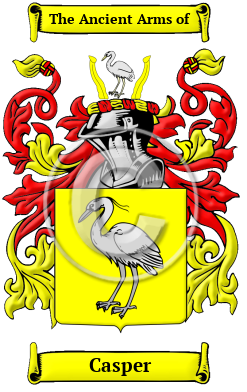 The name Casper only became a surname in the late Middle ages. It comes from the personal name Kaspar, which was especially popular in central Europe up to the 18th century. It is thought to derive from the Persian "kaehbaed," or "khazana-dar," which mean "treasure bearer." The name is said to have belonged to one of the three Magi, whose supposed remains were taken from Constantinople to Cologne in the 12th century.

Early Origins of the Casper family

The surname Casper was first found in various parts of the Holy Roman Empire. An early recorded instance of the surname is of a Johann Caspar recorded as being a vicar in Schaffhausen, in 1441. Schaffhausen was a city-state, until joining the Swiss Confederation in 1501. Families of Caspersen were found in Holstein; Caspers, Kespers in Bavaria and the Rhineland; and Kaspareck in the Slavic East.

Early History of the Casper family

This web page shows only a small excerpt of our Casper research. Another 71 words (5 lines of text) covering the years 1571, 1699, 1724, and 1772 are included under the topic Early Casper History in all our PDF Extended History products and printed products wherever possible.

Spelling variations of this family name include: Casper, Caspers, Kasper, Kaspar, Kespers and others.

More information is included under the topic Early Casper Notables in all our PDF Extended History products and printed products wherever possible.

In the United States, the name Casper is the 2,842nd most popular surname with an estimated 9,948 people with that name. [1]

Casper migration to the United States +

Casper Settlers in United States in the 18th Century

Casper Settlers in United States in the 19th Century

Suggested Readings for the name Casper +