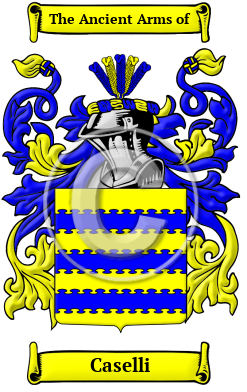 Early Origins of the Caselli family

The surname Caselli was first found in the culturally rich region of Lombardy, where earliest records date back to the year 1126 in Milan, when Apollonio Casati was Imperial Vicar for Lotario il Sassone.

Early History of the Caselli family

This web page shows only a small excerpt of our Caselli research. More information is included under the topic Early Caselli History in all our PDF Extended History products and printed products wherever possible.

Prominent among bearers of this family in early times was members of the Casati family of Milan during the late 13th century, who owned many castles and vast amounts of land. Other bearers of the name include Conte Casati, who was a Cardinal, and Giovannino Casati, who was mayor of Piacenza in 1350. Jaime de Casanova (c.1435-1504), a Spanish Roman Catholic cardinal; Pietro Casola (1427-1507), a Catholic Canon, born to a noble Italian family in Milan; Giovanni della Casa (1503-1556) was an author and prelate born near Florence appointed arch-bishop of Benevento. Cherubino Casati was a priest in Milan around 1550...
Another 222 words (16 lines of text) are included under the topic Early Caselli Notables in all our PDF Extended History products and printed products wherever possible.

Migration of the Caselli family

Immigrants bearing the name Caselli or a variant listed above include: Sevastian Casola, who arrived in Louisiana in 1779; A. Casselli settled in San Francisco, California, in 1850; Alessandro Casagrande, aged 52, who arrived at Ellis Island from Monterado, Italy, in 1909.