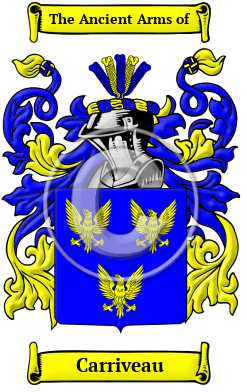 The surname Carriveau is an ancient French name from the province of Champagne. It is thought to be derived from a pre-Latin word "caravu," which meant "rocky place."

Early Origins of the Carriveau family

The surname Carriveau was first found in Champagne.

Gilles Corroret was from a family of haberdashers (boutique owners) and became a tour guide, leading foreigners around Paris during the sixteenth century.

Early History of the Carriveau family

This web page shows only a small excerpt of our Carriveau research. More information is included under the topic Early Carriveau History in all our PDF Extended History products and printed products wherever possible.

Notable amongst the family during this period was Thomas-Olivier Corret, who was a Jesuit in 1703 and was employed as a preacher. A Corrette was a composer in Rouen and in 1726 became an organist at Ste-Marie-Madeleine then the following year was the organist for the great priest of France. He published many pieces for the viola or flute, and the violin, masses and motets, and methods for flute and viola, harpsichord, voice, and violin. Ferdinand Corrèges was a sketcher and engraver in 1844. He studied...
Another 86 words (6 lines of text) are included under the topic Early Carriveau Notables in all our PDF Extended History products and printed products wherever possible.

Migration of the Carriveau family

Some of the first settlers of this family name or some of its variants were: 200 individuals who arrived from France onto Canadian shores between 1600 and 1900. Among these was Marguerite Corriveau, who was married in Quebec in 1650.