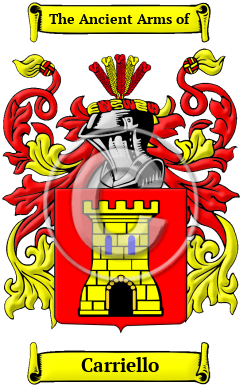 From the historical and enchanting region of Spain emerged a multitude of noble families, including the distinguished Carriello family. Originally, the Spanish people were known only by a single name. The process by which hereditary surnames were adopted in Spain is extremely interesting. Surnames evolved during the Middle Ages when people began to assume an extra name to avoid confusion and to further identify themselves. Often they adopted names that were derived from nicknames. Nickname surnames were derived from an eke-name, or added name. They usually reflected the physical characteristics or attributes of the first person that used the name. The name Carriello is a nickname type of surname for a person who was bold or shameless. Further research showed the name was derived from the Spanish word "carrillo," which means cheek.

Early Origins of the Carriello family

The surname Carriello was first found in Castile, one of the Christian kingdoms of medieval Spain.

Early History of the Carriello family

This web page shows only a small excerpt of our Carriello research. Another 71 words (5 lines of text) covering the years 1244, 1625 and 1721 are included under the topic Early Carriello History in all our PDF Extended History products and printed products wherever possible.

Prominent among members of the family were fifteenth century prelate Alonso Carrillo; Luis de Carrillo y Sotomayor, sixteenth century poet, literary critic and galley captain; Maria Barbara Carillo (1625-1721), burned at the stake for heresy during the Spanish Inquisition; she is believed to be the oldest person executed during the Inquisition at the age of 95 or 96; seventeenth...
Another 58 words (4 lines of text) are included under the topic Early Carriello Notables in all our PDF Extended History products and printed products wherever possible.

Migration of the Carriello family

Some of the first settlers of this family name or some of its variants were: Francisco Carrillo, who sailed to Cartagena in 1534; Gonzalo Carrillo, to Panama in 1535; Juan Carrillo, to Dominican Republic in 1535; Pedro Carrillo de Guzmá.