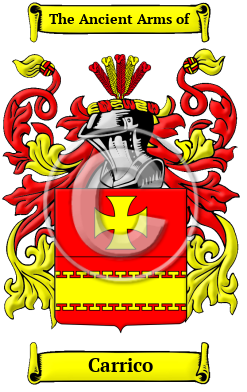 Early Origins of the Carrico family

The surname Carrico was first found in Bolgna (Latin: Bononia), the largest city and the capital of Emilia-Romagna Region. The famous University of Bolgna was founded in the 11th century, by the 13th century the student body was nearly 10,000. Dante and Petrarch studied there. Tisso was tried there for 1564 for writing satirical poems. Bologna naturally, is famous for its sausages. But many noted scholars were born there. In those ancient times only persons of rank, the podesta, clergy, city officials, army officers, artists, landowners were entered into the records. To be recorded at this time was in itself a family honor.

Early History of the Carrico family

This web page shows only a small excerpt of our Carrico research. Another 124 words (9 lines of text) covering the years 1222, 1248, 1604 and 1582 are included under the topic Early Carrico History in all our PDF Extended History products and printed products wherever possible.

Prominent among members of the family was Giacomo Carissimi, born at Marino near to Rome in 1604, according to Pitoni, "whom both M. Fétis and the Abbé Alfieri follow upon this point; but at Padua in 1582, if Spiridione be trusted for the place of his birth, and Mattheson for the date of it. His first professional post was that of Maestro at Assisi. This he held for some years. He then went to Rome, where he obtained the Mastership at the...
Another 81 words (6 lines of text) are included under the topic Early Carrico Notables in all our PDF Extended History products and printed products wherever possible.

In the United States, the name Carrico is the 4,536th most popular surname with an estimated 7,461 people with that name. [1]

Carrico migration to the United States +

Carrico Settlers in United States in the 18th Century

Carrico Settlers in United States in the 19th Century