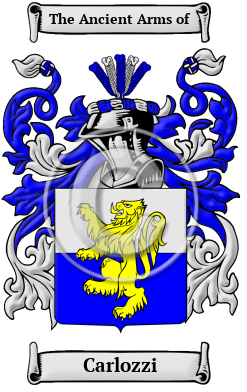 Early Origins of the Carlozzi family

The surname Carlozzi was first found in Milan (Italian: Milano, Milanese: Milan), the second-most populous city in Italy and the capital of Lombardy. In those ancient times only persons of rank, the podesta, clergy, city officials, army officers, artists, landowners were entered into the records. To be recorded at this time, at the beginning of recorded history, was of itself a great distinction and indicative of noble ancestry. Another line of this surname was found in the province of Veneto in the 13th century, when members of the Carlotti family were recognized as nobility in the city of Verona.

Early History of the Carlozzi family

Prominent among bearers of this family in early times was Carlo Innocenzo Carlone (1686-1775), an Italian painter and engraver; Taddeo Carlone (died 1613), Swiss-Italian sculptor and architect; Giovanni Bernardo Carlone (1590-1630), an Italian painter of the late-Mannerist and early-Baroque periods; Andrea Carlone (1626-1697), an Italian painter; Diego Francesco Carlone (1674-1750), an Italian sculptor; Raffaello Carli, a painter born in Vasari in 1466 whose fame escalated once he began working in Florence; a member of the Carluccio family, who was mayor of Matera in 1483; the Carli family of Genoa, hotel owners during the 15th century; Giaffredo di Carlo Carli, a judge...
Another 111 words (8 lines of text) are included under the topic Early Carlozzi Notables in all our PDF Extended History products and printed products wherever possible.

Migration of the Carlozzi family

Some of the first settlers of this family name or some of its variants were: James Carlon, who came to Philadelphia in 1828; Augt. Carlin, who came to New York in 1832; Ann Carlin, who came in 1842; Giuseppe DiCarlo, who settled in Ashtabula Co., OH sometime between 1875 and 1906.