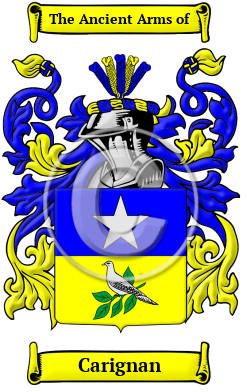 Early Origins of the Carignan family

The surname Carignan was first found in Brittany.

Early History of the Carignan family

This web page shows only a small excerpt of our Carignan research. Another 63 words (4 lines of text) covering the years 1861, 1871, and 1891 are included under the topic Early Carignan History in all our PDF Extended History products and printed products wherever possible.

Spelling variations of this family name include: Carignan, Carigneau, Carignet and others.

Notable amongst this name at this time was Godefroy Carignan, who worked in Cournoyer, Quebec in 1861 and many more. For example, Benjamin Carignan was an early innkeeper in Lachine in 1871; Joseph Carignan was a councillor in Saint-Luc in 1871 and Ludger Carignan was a doctor at this same time. Records also show C. Carignan as a tinsmith and Charles Carignan as a grocer in Batiscan in 1891, while François Carignan was a laborer in Montreal in 1891 and Napoléon Carignan was a...
Another 84 words (6 lines of text) are included under the topic Early Carignan Notables in all our PDF Extended History products and printed products wherever possible.

Carignan migration to the United States +

Carignan Settlers in United States in the 20th Century