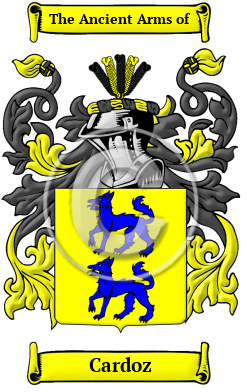 From the historical and enchanting region of Spain emerged a multitude of noble families, including the distinguished Cardoz family. The original bearer of the name Cardoz, which is a local surname, once lived, held land, or was born in the beautiful place named Cardenas in the region of Castilla la Vieja or in the place named Cardenas in the Rioja region. The place-name Cardenas is derived from the Aragonese word "cardelina," which means goldfinch. In Spanish, local surnames are often preceded by de, which is a prefix that means of or from and is indicative of a toponymic origin.

Early Origins of the Cardoz family

The surname Cardoz was first found in La Rioja, in northern Spain.

Early History of the Cardoz family

This web page shows only a small excerpt of our Cardoz research. Another 126 words (9 lines of text) covering the years 1223, 1529, 1765, 1569 and 1588 are included under the topic Early Cardoz History in all our PDF Extended History products and printed products wherever possible.

Migration of the Cardoz family

Some of the first settlers of this family name or some of its variants were: Fernando Cárdenas Zapata, who accompanied Viceroy Antonio de Mendoza to Peru in the mid sixteenth century. Other early migrants to the New World included Juan de Cardenes, who sailed to America in 1510.