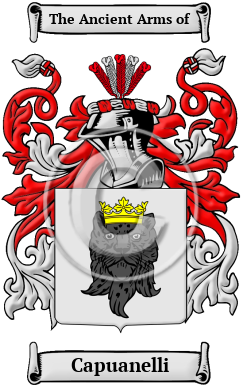 From the historical and enchanting Italian region of the islands of Sicily emerged a multitude of noble families, including the distinguished Capuanelli family. Although people were originally known only by a single name, it became necessary for people to adopt a second name to identify themselves as populations grew and travel became more frequent. The process of adopting fixed hereditary surnames was not complete until the modern era, but the use of hereditary family names in Italy began in the 10th and 11th centuries. Italian hereditary surnames were developed according to fairly general principles and they were characterized by a profusion of derivatives coined from given names. Although the most common type of family name found in Sicily is the patronymic surname, which is derived from the father's given name, the nickname type of surname is also frequently found. Nickname surnames were derived from an eke-name, or added name. They usually reflected the physical characteristics or attributes of the first person that used the name. The surname Capuanelli is a name for a person who is very determined, or head-strong, as it derives its origin from the Italian word "capo."

Early Origins of the Capuanelli family

The surname Capuanelli was first found in the reign of the Hohenstauffens in Sicily, which lasted from 1194 to 1266. At this time Corrado Caputo, nephew of the Emperor Frederick II, was Prince of Antiochia and general vicar of Sicily. Gaius Ateius Capito was a tribune of the plebs in 55 BC and Gaius Fonteius Capito was a consul of the Roman Empire in 59, succeeding Nero.

Early History of the Capuanelli family

This web page shows only a small excerpt of our Capuanelli research. More information is included under the topic Early Capuanelli History in all our PDF Extended History products and printed products wherever possible.

Surnames that originated in Italy are characterized by an enormous number of spelling variations. Some of these are derived from regional traditions and dialects. Northern names, for instance, often end in "o", while southern names tend to end in "i". Other variations come from the fact the medieval scribes tended to spell according to the sound of words, rather than any particular set of rules. The recorded variations of Capuanelli include Caputo, Capua, Capuano, Capuro, Capuanelli, Capuani, Capuanella and many more.

Prominent among bearers of this surname in early times was the Caputo family who were recognized as knights and noblemen in Naples. The Caputo family of Montefortino owned 15 feudal estates around the year 1400; Gualtiero Caputo was mayor of Naples during the reign of Carlo d'Angi; Consalvo Caputo was Bishop of San Marco; Manilio Caputo was a famous poet in 1550; Pietro-Paolo Caputo was governor of Foligno, Imola and Narni around this time; Giovanni Donato Caputo of Lecce was a...
Another 80 words (6 lines of text) are included under the topic Early Capuanelli Notables in all our PDF Extended History products and printed products wherever possible.

Migration of the Capuanelli family

Investigation of immigration and passenger lists has revealed a number of people bearing the name Capuanelli: Domenico Capuano, who arrived in Philadelphia in 1840, and B. Capuro, who settled in San Francisco, California, in 1850.