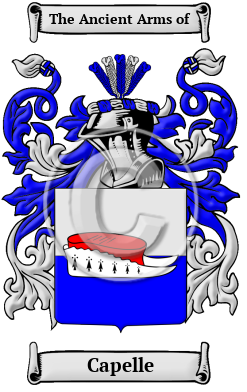 From the ancient and picturesque Italian region of Venice emerged a variety of distinguished names, including the notable surname Capelle. Although people were originally known only by a single name, it became necessary for people to adopt a second name to identify themselves as populations grew and travel became more frequent. The process of adopting fixed hereditary surnames was not complete until the modern era, but the use of hereditary family names in Italy began in the 10th and 11th centuries. Italian hereditary surnames were developed according to fairly general principles and they are characterized by a profusion of derivatives coined from given names. Although the most traditional type of family name found in the region of Venice is the patronymic surname, which is derived from the father's given name, local surnames are also found. Local names, which are the least frequent of the major types of surnames found in Italy, are derived from a place-name where the original bearer once resided or held land. Often Italian local surnames bore the prefix "di," which signifies emigration from one place to another, but does not necessarily denote nobility. The Capelle family lived in the city of Ferrara, where the Cappelli family occupied many of the first seats in the Estensi Court in the 12th century.

Early Origins of the Capelle family

The surname Capelle was first found in the city of Ferrara, where the Cappelli family occupied many of the first seats in the Estensi Court in the 12th century.

Early History of the Capelle family

This web page shows only a small excerpt of our Capelle research. More information is included under the topic Early Capelle History in all our PDF Extended History products and printed products wherever possible.

In comparison with other European surnames, Italian surnames have a surprising number of forms. They reflect the regional variations and the many dialects of the Italian language, each with its own distinctive features. For example, in Northern Italy the typical Italian surname suffix is "i", whereas in Southern Italy it is "o". Additionally, spelling changes frequently occurred because medieval scribes and church officials often spelled names as they sounded rather than according to any specific spelling rules. The spelling variations in the name Capelle include Cappelli, Cappello, Cappiello, Cappella, Cappilli, Capelli, Capello, Capelle, Cappelletti, Cappelletto, Capelletti, Cappellini, Cappelìn, Cappelloni, Cappellacci, Cappellaccio, Cappellazzo, Cappellari, Cappellaro, Cappellèr, Capellari, Cappelluti and many more.

Prominent among members of the family was Marino Cappello, who was a soldier in Venice in 1336; Pasquino de Cappelli was a lawyer in Cremona in 1340; Andrea Cappello of Venice was the mayor of Brescello from 1377 to 1411; Alvise Cappello was a soldier in Venice in 1449; Bianco Cappello (1548-1587), was an Italian noblewoman and courtesan, mistress, and later the second wife, of Francesco I de' Medici, Grand Duke of Tuscany; Gabriele Cappellini was a well known painter in Ferrara around 1530; Pietro Capelli (died 1734), was an Italian painter of the Rococo; Felice Cappelletti (1656-1738) was an Italian...
Another 105 words (8 lines of text) are included under the topic Early Capelle Notables in all our PDF Extended History products and printed products wherever possible.

In France, the name Capelle is the 610th most popular surname with an estimated 7,735 people with that name. [1]

Migration of the Capelle family