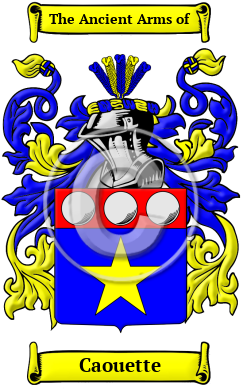 Early Origins of the Caouette family

The surname Caouette was first found in Touraine.

Early History of the Caouette family

Notable at this time was P. Chouard, who was a lawyer in Rouen in 1593. Of the Chouet family were two councillors at the Parliament of Bretagne in 1622; the Chouard families of Guinimonière, Riardais, Porte Chouard, Bourbouseul, and Garoulaye were given noble status of ancient extraction in 1669. Marie-Emile de Joly de Choin was the daughter of Pierre, state councillor of the duke of Savoy; the Chouard or Chouart line fixed in Hautout, Sahurs, Val de la Haye in the seventeenth century, is represented in Paris. Louis-Albert de Joly de Choin was bishop of Toulon in 1702. A...
Another 98 words (7 lines of text) are included under the topic Early Caouette Notables in all our PDF Extended History products and printed products wherever possible.

Migration of the Caouette family

Some of the first settlers of this family name or some of its variants were: 300 individuals of the lineage who arrived from France onto Canadian shores between 1600 and 1900. The Chouan family, originally from Paris, settled in Canada with Guillaume Chouan, born in 1732.