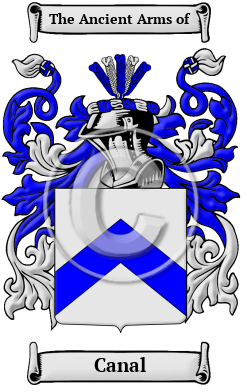 The Italian name Canal is derived from one of several places named Canale in northern Italy. The place name comes from the Italian word "canale," meaning "canal." Although the most traditional type of family name found in the region of Venice is the patronymic surname, which is derived from the father's given name, local surnames, created from place names are also found. These local names, are derived from a place-name where the original bearer once resided or held land, and often bear the prefix "di," meaning "from."

Early Origins of the Canal family

The surname Canal was first found in the area around the city of Ferrara, where Tommaso Canali was a judge in the mid 12th century. One line of the Canal family originated in the Polcevera valley, northwest Italy, and was first mentioned in documents dating from the year 1100. Of this line, Emanuele Canale was a member of the faction that supported Paolo Da Novi in 1506. Otto Canella (d. before 1143) was Consul of Genoa in 1133 and is an ancestor of the House of Grimaldi, the family which to this day, rules Monaco.

Early History of the Canal family

In comparison with other European surnames, Italian surnames have a surprising number of forms. They reflect the regional variations and the many dialects of the Italian language, each with its own distinctive features. For example, in Northern Italy the typical Italian surname suffix is "i", whereas in Southern Italy it is "o". Additionally, spelling changes frequently occurred because medieval scribes and church officials often spelled names as they sounded rather than according to any specific spelling rules. The spelling variations in the name Canal include Canal, Canale, Canali, Da Canale, Da Canàl, Da Canal, Canaletto, Canalini, Canales and many more.

Prominent among members of the family was Guidone Canali, who was the Bishop of Turin in 1322; Carlo Canale of Mantua was highly involved with the church in the 15th century; Bartolomeo Canale was the mayor of Massafiscaglia during the 15th century; Vittorio Canale was a military Captain of the troops at Foligno; Altobello Canale was a knight in Todi in 1470; his brother, Matteo Canale was Captain of the Ghibelline faction in the city; Nicola Canale was an admiral...
Another 79 words (6 lines of text) are included under the topic Early Canal Notables in all our PDF Extended History products and printed products wherever possible.

Canal migration to the United States +

A look at the immigration and passenger lists has shown a number of people bearing the name Canal:

Canal Settlers in United States in the 18th Century

Canal Settlers in United States in the 19th Century