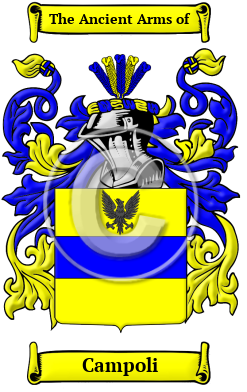 Early Origins of the Campoli family

The surname Campoli was first found in the city of Treviso, where earliest records date back to the year 1010, with Gerardo Campo.

Early History of the Campoli family

This web page shows only a small excerpt of our Campoli research. More information is included under the topic Early Campoli History in all our PDF Extended History products and printed products wherever possible.

Prominent among members of the family was Aldrighetto Campo of Trento, who was the Bishop of the city in 1232; Bonino da Campione, an Italian sculptor in the Gothic style, active between 1350 and 1390; Galeazzo Campi was a famous painter in Cremona in 1470, with works to be seen today in Milan and around Cremona; Giulio Campi was a fresco painter around 1500 with a major work in the church of Santa Maria delle Grazie in Soncino; Francesco Campo was Baron of Mossomeli and on June 23, 1498 was Captain of Girenti's Army; Pietro Campo was Chief Justice in Palermo...
Another 154 words (11 lines of text) are included under the topic Early Campoli Notables in all our PDF Extended History products and printed products wherever possible.

Migration of the Campoli family