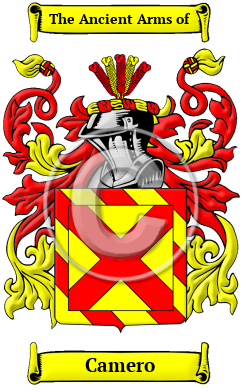 From the historical and enchanting region of Spain emerged a multitude of noble families, including the distinguished Camero family. Originally, the Spanish people were known only by a single name. The process by which hereditary surnames were adopted in Spain is extremely interesting. Surnames evolved during the Middle Ages when people began to assume an extra name to avoid confusion and to further identify themselves. Often they adopted names that were derived from nicknames. Nickname surnames were derived from an eke-name, or added name.

Early Origins of the Camero family

The surname Camero was first found in Valencia, on Spain's Mediterranean coast.

Early History of the Camero family

Migration of the Camero family

Some of the first settlers of this family name or some of its variants were: Bartolomé Camacho Zambrano, who accompanied Jiménez de Quesada on an expedition to Colombia in 1536. He founded the city of Tunja. Other early migrants to the New World included Antonio Camacho, who sailed to Hispaniola in 1512.