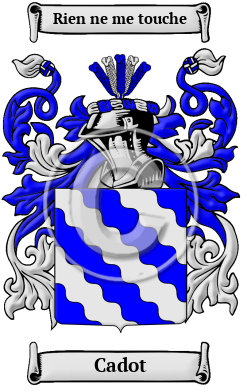 The surname is one of the most ancient names that came from France during the Middle Ages. It is a Breton name for a person who was a person who was small but a strong fighter. The name Cadot is derived from the Old French word "cad," which means "little fighter."

Early Origins of the Cadot family

The surname Cadot was first found in Brittany (French: Bretagne), where they are recorded as an ancient family with lands, manors, and estates.

The family was involved in many of the early conflicts between French royalty and local Lords regarding the jurisdiction of their lands. A family member by the name of Cadeau d'Arcy would later hold large estates in Picardy and in île-de-France. He became secretary to the King of France and was ennobled by the French Parliament as a viscount on 30th June 1830. Many family members later migrated to Acadia in Canada. Some settled in the province of Quebec, while others left for Louisiana in the forced exodus of the Acadians.

Pierre Cadieux, son of Jean and Marie (née Valade), settled in Quebec in the 17th century. He married Marguerite Menard, daughter of Jacques and Catherine (née Fortier), at Boucherville on 11th February 1697. He married for the second time on 29th May 1702 at Pointe-aux-Trembles to Jeanne Mersan. [1]

Early History of the Cadot family

This web page shows only a small excerpt of our Cadot research. Another 57 words (4 lines of text) covering the years 1660 and 1696 are included under the topic Early Cadot History in all our PDF Extended History products and printed products wherever possible.

French surnames were subject to numerous spelling alterations depending on the region and time it was used. The early development of the French language relied heavily on borrowing elements and grammar from other languages. For example, Old French was infused with Germanic words and sounds when barbarian tribes invaded and settled in France after the fall of the Roman Empire. Middle French also borrowed heavily from the Italian language during the Renaissance. As a result of these linguistic and cultural influences, the name Cadot is distinguished by a number of regional variations. The many spelling variations of the name include Cadieux, Cadieu, Cadeau, Cadeaux, Cadio, Cadiot, Cadéo, Cadiou, Cadioux, Cadious, Cadius, Cadier, Caduc, Cadel, Cadelon, Cadelard, Cadenel, Cadenet, Cadu, Cado, Cadou, Cadoux, Cadot, Cadotte, Caudos, Caddieux, Caddieu, Caddeau, Caddeaux, Caddioux, Caddiou, Caddious, Caddius, Caddier and many more.

More information is included under the topic Early Cadot Notables in all our PDF Extended History products and printed products wherever possible.

In the 1700s, land incentives were finally given out by France to 2,000 migrants. Early marriage was encouraged in New France, and youths of 18 took fourteen-year-old girls for their wives. The fur trade was developed and attracted migrants, both noble and commoner from France. 15,000 explorers left Montreal in the late 17th and 18th centuries, leaving French names scattered across the continent. The search for the Northwest passage continued. Migration from France to New France or Quebec, as it was now more popularly called, continued until 1759. By 1675, there were 7000 French in Quebec. By the same year the Acadian presence in Nova Scotia, New Brunswick and Prince Edward Island had reached 500. In the treaty of Utrecht, Acadia were ceded by France to Britain in 1713. In 1755, 10,000 French Acadians refused to take an oath of allegiance to England and were deported. They found refuge in Louisiana. Meanwhile, in Quebec, the French race flourished, founding in Lower Canada, one of the two great solitudes which became Canada. Many of this distinguished family name Cadot were prominent in social, cultural, religious and political affairs in France and New France. Amongst the settlers in North America with this distinguished name Cadot were

Cadot Settlers in Canada in the 17th Century

Cadot Settlers in Canada in the 18th Century

Motto: Rien ne me touche
Motto Translation: Springing to life, do not touch