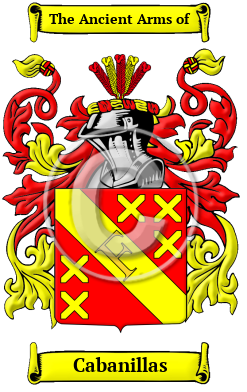 The origins the old family name Cabanillas can be found within medieval Spain. While the patronymic and metronymic surnames, which are derived from the name of the father and mother respectively, are the most common form of a hereditary surname in Spain, occupational surnames also emerged during the late Middle Ages. Many people, such as the Cabanillas family, adopted the name of their occupation as their surname. The surname Cabanillas was an occupational name for a knight or a knight's servant.

Early Origins of the Cabanillas family

The surname Cabanillas was first found in Castile, an important Christian kingdom of medieval Spain.

Early History of the Cabanillas family

Cabanillas migration to the United States +

Cabanillas Settlers in United States in the 19th Century