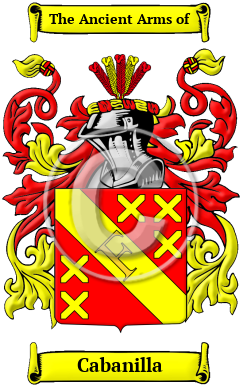 The origins the old family name Cabanilla can be found within medieval Spain. While the patronymic and metronymic surnames, which are derived from the name of the father and mother respectively, are the most common form of a hereditary surname in Spain, occupational surnames also emerged during the late Middle Ages. Many people, such as the Cabanilla family, adopted the name of their occupation as their surname. The surname Cabanilla was an occupational name for a knight or a knight's servant.

Early Origins of the Cabanilla family

The surname Cabanilla was first found in Castile, an important Christian kingdom of medieval Spain.

Early History of the Cabanilla family

Migration of the Cabanilla family

Some of the first settlers of this family name or some of its variants were: Juan de Cavallón, who voyaged to America in the 1500s. He claimed the territory of Costa Rica for the Spanish Crown, and died in Mexico in 1565. Other early migrants to the New World bearing this surname or a variant spelling of the name included Gutierre de Caballos, who sailed to America in 1512.