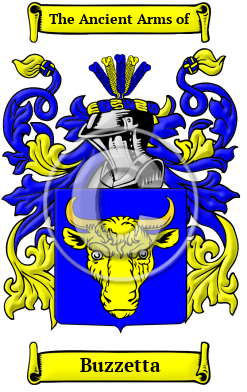 Early Origins of the Buzzetta family

The surname Buzzetta was first found in Genoa (Italian: Genova). Early records revealed Ludovico Bozzuto of Naples, was the archbishop of the city around 1360; Giovanni Bozzuto was a soldier in Naples in 1384; and Giovanni Battista Bozzola was an editor in Brescia during the 15th century.

Early History of the Buzzetta family

This web page shows only a small excerpt of our Buzzetta research. More information is included under the topic Early Buzzetta History in all our PDF Extended History products and printed products wherever possible.

There are many variations of most of those Italian names that originated in the medieval era. Some of these come from regional differences, like the tradition of ending northern names in "o" and southern names in "i". Others come from inaccuracies in the recording process, which were extremely common in the eras before dictionaries standardized spelling. Some of the spelling variations of Buzzetta are Bozzo, Bozzano, Bozino, Bozio, Bozza, Bozzola, Bozzuto, Bozzuta, Bozzelli, Bozelli, Bozzolo, Bozomo, Bozzachi, Bozzetta and many more.

Prominent among bearers of this surname in early times was Tommaso Bozio was a member of the nobility, an author, and a lawyer in Gubbio in 1548; Bartolomeo Bozza was a musician...
Another 31 words (2 lines of text) are included under the topic Early Buzzetta Notables in all our PDF Extended History products and printed products wherever possible.

Migration of the Buzzetta family

An investigation of the immigration and passenger lists has revealed a number of people bearing the name Buzzetta: Augustino Bozzano, who arrived in Philadelphia, Pennsylvania, in 1878; Francesco Bozzelli, aged 29, who arrived at Ellis Island from Vasto, Italy, in 1916.