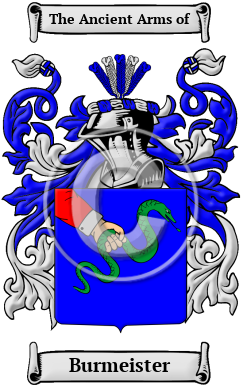 The history of the Burmeister family begins almost a millennium ago, in the northern German region of Schleswig-Holstein, where the family name first emerged. The name Burmeister is derived from the German words "bur" or "bauer," meaning "farmer," and "meister," meaning "master;" thus, the name literally means "master farmer." Alternatively, the Low German term "Burmester" refers to the town elder who held the position just below that of the mayor. From this source, the original bearer of the name Burmeister was likely the master of an estate or a prominent figure in his village.

Early Origins of the Burmeister family

The surname Burmeister was first found in Schleswig-Holstein, where the surname was first recorded. The earliest known bearer was Godeke Burmeister, who lived in the city of Rostock in 1265.

Early History of the Burmeister family

This web page shows only a small excerpt of our Burmeister research. Another 74 words (5 lines of text) covering the years 1334, 1400, 1608, 1675, 1681, and 1714 are included under the topic Early Burmeister History in all our PDF Extended History products and printed products wherever possible.

Another 33 words (2 lines of text) are included under the topic Early Burmeister Notables in all our PDF Extended History products and printed products wherever possible.

In the United States, the name Burmeister is the 6,096th most popular surname with an estimated 4,974 people with that name. [1]

Burmeister migration to the United States +

Burmeister Settlers in United States in the 19th Century

Burmeister Settlers in Canada in the 19th Century

Burmeister Settlers in Australia in the 19th Century

Burmeister Settlers in New Zealand in the 19th Century

Historic Events for the Burmeister family +