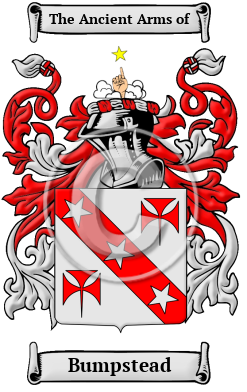 Early Origins of the Bumpstead family

The surname Bumpstead was first found in Essex, at either Bumpstead-Helion, Bumpstead-at-the-Tower, or Steeple Bumpstead. The earliest record of the name was as Bumesteda which was listed in the Domesday Book. By the 13th century, the place was listed as Bumpsted Helyin in 1238 and later a Stepilbumstede in 1261. The name literally means "place where the reeds grow" derived from the Old English "bune" + "stede." [1]

Early History of the Bumpstead family

This web page shows only a small excerpt of our Bumpstead research. Another 157 words (11 lines of text) covering the years 1000 and 1273 are included under the topic Early Bumpstead History in all our PDF Extended History products and printed products wherever possible.

More information is included under the topic Early Bumpstead Notables in all our PDF Extended History products and printed products wherever possible.

Bumpstead Settlers in West Indies in the 17th Century