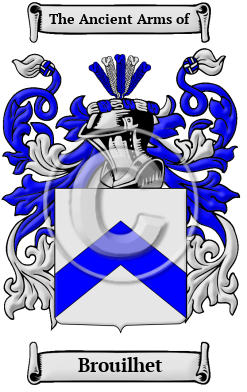 Early Origins of the Brouilhet family

The surname Brouilhet was first found in Bourbonnais, a historic province in the centre of France, now part of the modern department of Allier and Cher.

Prominent from the oldest branch of this line was Jean Brouillot, the judge of Joan of Arc. Originally from the diocese of Bayeux, chief of arts and with a law licence, he was prosecutor of the University of Paris in 1403. In the judgement of Joan of Arc he refused to compromise, saying that the opinions of the chief theologians must be followed.

Brouillards or "Mists" or "Fog" is the first prelude of Claude Debussy's second set of preludes and Lucien Brouillard is a 1983 French Canadian political drama film directed by Bruno Carrière. Mont Brouillard (4,069 m) is a mountain in the Mont Blanc massif in the Val d'Aosta, Italy.

Early History of the Brouilhet family

This web page shows only a small excerpt of our Brouilhet research. More information is included under the topic Early Brouilhet History in all our PDF Extended History products and printed products wherever possible.

Notable amongst the family name in this period was Antoine de Brouilly, marquis of Piennes in 1611. Franc de Monbeton de Bourrouillan, born in 1658, was named infantry captain in Canada on 17th March 1687 under the name of Saint Andre, commander of Plaisance (Newfoundland). He was appointed Governor of Newfoundland on 17th February 1691, rejoined his troupes the same year and built the St. Louis Fort. In April 1692 he presented a plan of attack for an English...
Another 79 words (6 lines of text) are included under the topic Early Brouilhet Notables in all our PDF Extended History products and printed products wherever possible.

Migration of the Brouilhet family

Some of the first settlers of this family name or some of its variants were: 550 immigrants of the lineage who arrived from France onto Canadian shores between 1600 and 1900. Among earlier settlers were Charles Brouillard, who was married in Montreal in 1688.