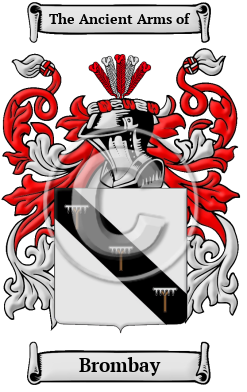 The name Brombay was derived from the village named Brumby in Frodingham, near Scunthorpe in Lincolnshire.

Early Origins of the Brombay family

The surname Brombay was first found in Lincolnshire where the surname is descended from the tenant of the lands of Brumby, the King's lands, held by a Norman noble who was under-tenant but was not recorded in the Domesday Book census of 1086. The surname has always been quite rare but genealogical records reveal that families were found in the Upton area in the mid 1700's. In Australia, the term "brumby" refers to a feral horse but how the name came about is uncertain. One reference claims that brumbies were the bush name in Queensland for 'wild' horses. Another claims that Sergeant James Brumby who lived at Mulgrave Place in New South Wales, left the horses behind when he left for Tasmania in 1804.

Early History of the Brombay family

This web page shows only a small excerpt of our Brombay research. Another 76 words (5 lines of text) covering the year 1319 is included under the topic Early Brombay History in all our PDF Extended History products and printed products wherever possible.

More information is included under the topic Early Brombay Notables in all our PDF Extended History products and printed products wherever possible.

Migration of the Brombay family

Some of the first settlers of this family name or some of its variants were: Many settlers were recorded from the mid 17th century in the great migration from Europe. Migrants settled in the eastern seaboard from Newfoundland, to Maine, to Florida, and to the islands..