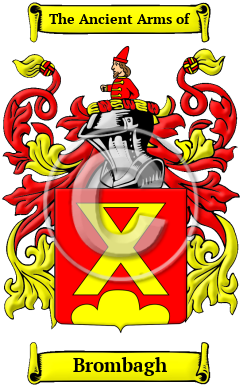 The distinguished and ancient German surname Brombagh is of two possible origins. Firstly, the name is derived from towns of the same name, located in various regions of Germany. Alternatively, the name may be derived from "in der Brumbach," the name of a farm located near Müsen, Germany. In each case, the progenitor of the name would have been someone who hailed from one of these locations.

Early Origins of the Brombagh family

The surname Brombagh was first found in Swabia and Switzerland, where the name probably first emerged in the town of Brombach. It was a common practice of the time to refer to a new resident of a city by the name of his hometown; thus, the first bearer of the name Brombagh was likely a native of Brombach who had settled in a new city. The young Brombagh family was instrumental during this formative period, figuring prominently in the history of the region and contributing greatly to the development of medieval Swabian society.

Early History of the Brombagh family

This web page shows only a small excerpt of our Brombagh research. Another 214 words (15 lines of text) covering the years 1495, 1563, 1618, 1631, 1582 and 1662 are included under the topic Early Brombagh History in all our PDF Extended History products and printed products wherever possible.

Spelling variations of this family name include: Brombach, Brumbach, Brumback, Brumbaugh, Brumbagh, Bromback and many more.

Another 35 words (2 lines of text) are included under the topic Early Brombagh Notables in all our PDF Extended History products and printed products wherever possible.

Migration of the Brombagh family