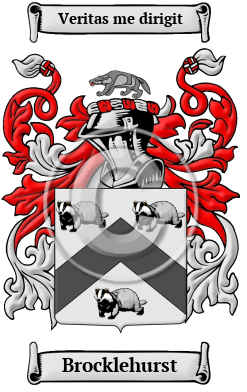 The surname Brocklehurst is generally thought to be of toponymic origin, from a place name located near Accrington, Lancashire. The name is made up of three elements "brock," or "broc" in Middle English, which means "badger," "le," which is most likely a reduction of "hole" or "hollow," and "hurst," or "hyrst" in Old English which denotes a wooded hill. Thus together, this name describes some sort of clearing in the woods, where badgers lived.

Early Origins of the Brocklehurst family

Early History of the Brocklehurst family

This web page shows only a small excerpt of our Brocklehurst research. Another 48 words (3 lines of text) covering the years 1847, 1000, 1831 and 1898 are included under the topic Early Brocklehurst History in all our PDF Extended History products and printed products wherever possible.

More information is included under the topic Early Brocklehurst Notables in all our PDF Extended History products and printed products wherever possible.

Brocklehurst migration to the United States +

Brocklehurst Settlers in United States in the 18th Century

Brocklehurst Settlers in United States in the 19th Century

Brocklehurst Settlers in New Zealand in the 19th Century