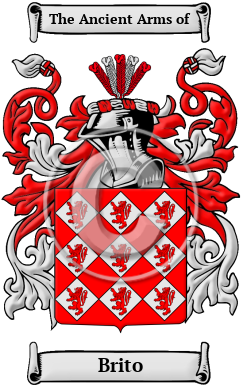 Early Origins of the Brito family

The surname Brito was first found in Castille, in northern Spain. The name most likely came to Spain from Portugal, where there are numerous places so named.

Early History of the Brito family

Spelling variations of this family name include: Britto, Brito and others.

Prominent among members of the family Estéban de Brito who lived about 1625. He was musical director at the cathedrals of Badajos and Malaga, and composer of...
Another 26 words (2 lines of text) are included under the topic Early Brito Notables in all our PDF Extended History products and printed products wherever possible.

In the United States, the name Brito is the 3,056th most popular surname with an estimated 9,948 people with that name. [1]

Brito migration to the United States +

Brito Settlers in United States in the 16th Century

Brito Settlers in United States in the 18th Century

Brito Settlers in United States in the 19th Century

Historic Events for the Brito family +