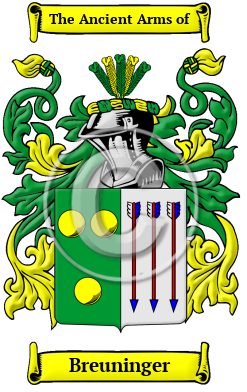 The surname Breuninger, is likely of patronymic origin, that is, it belongs to the category of surnames derived from the first name of the father of the initial bearer. In this instance, the name indicates "son of Brüning," a variant of Bruno. The personal name Bruno is a pet form of names such as Brunolf, Brunwardt and Brunheri, all derived from the Old High German word "brunja" meaning brown. The name probably would have been initially given as a nickname to one with brown hair or a dark complexion. The name may also have been derived from the Middle High German "brunne" meaning "breastplate." Bruningsen is also a place name in Westfalia.

Early Origins of the Breuninger family

The surname Breuninger was first found in Westfalia. The earliest record dates back to 1206, when Bruning von Staufen, possibly the founder of the village of Breuningsweiler, was mentioned in the "Wurttembergisches Urbunderbuch II." In 1284 Chunrat Bruninch was living in Augsburg and in 1351 Cuonrad Brunig was a curator at Baden-Baden. An unknown Breininger was recorded in Rottweil in 1357. Wolfgang Breuningk was living in Grafental in 1503, and Christoph Breuning in Tubingen in 1539.

Early History of the Breuninger family

Notables of the period with the name Breuninger were Conrad Breuning von Buchenbach, who was Governor of Tuebingen in 1514; Hans Bruning, a captain in Hamburg in 1687; Johann Adam Breunig (1660-1727), a German Baroque architect; and Adolf Bruning from Lubeck, who was ennobled in...
Another 45 words (3 lines of text) are included under the topic Early Breuninger Notables in all our PDF Extended History products and printed products wherever possible.

Breuninger migration to the United States +

Breuninger Settlers in United States in the 18th Century

Breuninger Settlers in United States in the 19th Century