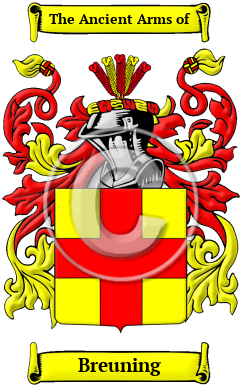 The surname Breuning is a ancient German name that originated in the Rhineland. While the Germans at first used only one name, population increases created confusion among people of the same name, forcing them to adopt hereditary surnames. Two common types of German names are patronymic names, taken from the given name of the father, and metronymic names, taken from the name of the mother. Breuning was derived from the baptismal name for the son of Bruno, which was originally derived from the Old German word bruen, which means brown.

Early Origins of the Breuning family

The surname Breuning was first found in the Rhineland, where the name Breuning contributed greatly to the development of an emerging nation, and later played a large role in the tribal and national conflicts of the area. Over time, the family name branched into many houses, where members continued to play a significant role in the local social and political affairs.

Early History of the Breuning family

This web page shows only a small excerpt of our Breuning research. Another 98 words (7 lines of text) covering the year 1757 is included under the topic Early Breuning History in all our PDF Extended History products and printed products wherever possible.

More information is included under the topic Early Breuning Notables in all our PDF Extended History products and printed products wherever possible.

Breuning migration to the United States +

Breuning Settlers in United States in the 18th Century

Breuning Settlers in United States in the 19th Century