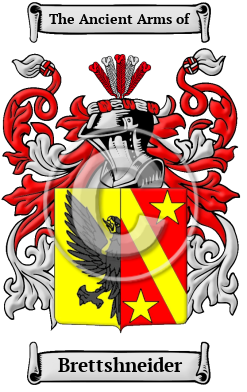 The ancestral home of the Brettshneider family is in the German state of Bavaria. The name Brettshneider is an occupational hereditary surname, a type of surname that was taken from a word describing or common to the profession of the original bearer. It is a name for a carpenter or a person who worked making shelves and other wooden objects. The name Brettshneider was originally derived from the Old Germanic word Brett, which means carpenter. It was given to a person who ran a sawmill or a lumber merchant. By the Middle Ages, the Brettshneider family had been elevated to the ranks of the nobility and had become extremely involved in the local social, economic and political affairs of Bavaria. It acquired a prestigious reputation for its contribution to the development of the district. The social status and prestige of the Brettshneider family was increased when it expanded and acquired distant estates in other areas of Germany.

Early Origins of the Brettshneider family

The surname Brettshneider was first found in Bavaria, where the name could be considered to have made an early contribution to the feudal society which became the backbone of early development of Europe. There is record of a Sydel Bretsnyder in 1372 in Liegnitz and a Peter Bretsnyder in Breslau in 1397.

Early History of the Brettshneider family

This web page shows only a small excerpt of our Brettshneider research. Another 71 words (5 lines of text) covering the years 1880, 1844, 1776 and 1848 are included under the topic Early Brettshneider History in all our PDF Extended History products and printed products wherever possible.

Many cultural groups lived in the German states in medieval times. Each had its own dialect and traditions, and unique variations of popular names. Low German, which is similar to contemporary Dutch, was spoken in Westphalia. German names are characterized by additions such as regional suffixes and phrases that tell something about the origin or background of its original bearer. Further contributing to the variation in German names was the fact that there were no spelling rules in medieval times: scribes recorded names according to their sound. The recorded spelling variations of Brettshneider include Bret, Brett, Brette, Bretsch, Brettschneider, Bretsnyder, Brettschnyder and many more.

Prominent among members of the name Brettshneider in this period include Friedrich Wilhelm Bretschneider, a lieutenant field-marshal in the Austrian army and at one time the commandant of the Italian city...
Another 30 words (2 lines of text) are included under the topic Early Brettshneider Notables in all our PDF Extended History products and printed products wherever possible.

Migration of the Brettshneider family

The great European flow of migration to North America, which began in the middle of the 17th century and continued into the 20th century, was particularly attractive to those from Bavaria who wished to escape either poverty or religious persecution. For many Bavarian tenant farmers, the chance to own their own land was a major incentive. So the widespread colonization of the United States began in 1650, when many immigrants from Germany settled in pockets in Pennsylvania, Texas, New York, Illinois, and California. In Canada, German settlement centered in Ontario and the prairie provinces. Among those of this surname listed in various historical records were: Augustus Bretschneider, who came to Philadelphia in 1852.