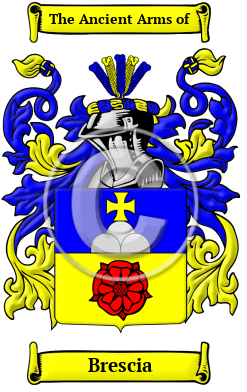 Early Origins of the Brescia family

The surname Brescia was first found in Brescia (Latin: Brixia) in Lomardy, capital of the province of Brescia. The Pizza del Museois the main feature of the town and marks the site of the Forum. Vespasian erected the Capitoleum in 73 A.D. It contains the famous bronze statue of Vistory. The convent of S.Salvatore is also notable, founded by Desiderius, King of Lomardy. In those ancient times only persons of rank, the podesta, clergy, city officials, army officers, artists, landowners were entered into the records. To be recorded at this time, at the beginning of recorded history, was of itself a great distinction and indicative of noble ancestry.

Early History of the Brescia family

Another 34 words (2 lines of text) are included under the topic Early Brescia Notables in all our PDF Extended History products and printed products wherever possible.

In the United States, the name Brescia is the 18,790th most popular surname with an estimated 2,487 people with that name. [1]

Brescia migration to the United States +

Brescia Settlers in United States in the 20th Century