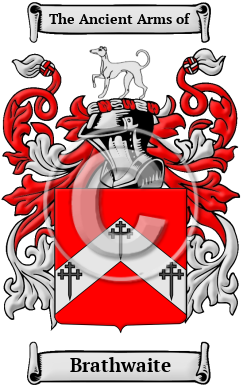 Among the all the peoples of ancient Scotland, the first to use the name Brathwaite were the Strathclyde- Britons. It was a name for someone who lived in any of the places so named in Cumberland or Yorkshire, bordering on Scotland. This place-name derived from the Old Norse words for a broad clearing. [1]

Early Origins of the Brathwaite family

The surname Brathwaite was first found in Cumberland, at Braithwaite, a township, in the parish of Crosthwaite, Allerdale ward above Derwent. Braithwaite is also a hamlet, in the parish of KirkBramwith, union of Doncaster, Upper division of the wapentake of Osgoldcross in the West Riding of Yorkshire. [2]

"Braithwaite is a characteristic north of England name, occurring in Westmorland, Cumberland, Yorkshire, and Lancashire. A Cumberland parish and West Riding hamlets are thus called. An ancient Westmorland family of Brathwaite or Braithwaite resided at Ambleside, near Kendal, in the 16th and 17th centuries, and afterwards at Warcop and Burneside. " [3]

Further to the north in Scotland, "the name is found in Edinburgh in the seventeenth century as Breathit and Breathwit." [5]

Early History of the Brathwaite family

The variation in the spelling of Medieval names is a result of the lack of spelling rules in the English language prior to the last few hundred years. Before that time, scribes spelled according to sound, often varying the spelling of name within a single document. Brathwaite has appeared as Brathwaite, Brathwait, Braithwaite, Braithwait and many more.

Notable amongst the family at this time was Richard Braithwaite or Brathwaite (1588-1673), an English poet best known for his 'Drunken Barnaby's Four Journeys.' He "belonged to a Westmorland family who variously spelt their name Brathwaite, Brathwait, Brathwayte, Braithwaite, Braythwait, and Braythwayte. The poet uses indifferently the first three of these forms. His great-grandfather, also Richard, the squire of Ambleside, had one son, Robert, who had two sons, Thomas and James, and five daughters. Thomas, the poet's...
Another 77 words (6 lines of text) are included under the topic Early Brathwaite Notables in all our PDF Extended History products and printed products wherever possible.

In the United States, the name Brathwaite is the 10,802nd most popular surname with an estimated 2,487 people with that name. [6]

Brathwaite migration to the United States +

Brathwaite Settlers in United States in the 18th Century

Brathwaite Settlers in Australia in the 19th Century