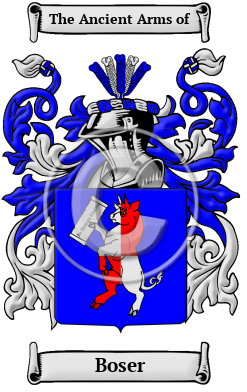 From the ancient and picturesque Italian region of Lombardy emerged a variety of distinguished names, including the notable surname Boser. Although people were originally known only by a single name, it became necessary for people to adopt a second name to identify themselves as populations grew and travel became more frequent. The process of adopting fixed hereditary surnames was not complete until the modern era, but the use of hereditary family names in Italy began in the 10th and 11th centuries. Italian hereditary surnames were developed according to fairly general principles and they are characterized by a profusion of derivatives coined from given names. Although the most traditional type of family name found in the region of Lombardy is the patronymic surname, which is derived from the father's given name, local surnames are also found. Local names, which are the least frequent of the major types of surnames found in Italy, are derived from a place-name where the original bearer once resided or held land. Often Italian local surnames bore the prefix "di," which signifies emigration from one place to another, but does not necessarily denote nobility. The Boser family lived in the city of Milan. The Boser surname is derived from the Latin personal name "Bosius."

Early Origins of the Boser family

The surname Boser was first found in 1170, where Consabecco Bossi was part of the Commune of Milan.

Boso (d. 1181?), was the third English cardinal, "described by Cardella as Boso Breakspear, an Englishman by birth, the nephew of Pope Adrian IV, and a monk of the order of St. Benedict. He was a member of the monastery of St. Albans, but went to Rome to follow the fortunes of his uncle." [1]

Early History of the Boser family

This web page shows only a small excerpt of our Boser research. More information is included under the topic Early Boser History in all our PDF Extended History products and printed products wherever possible.

There are many variations of most of those Italian names that originated in the medieval era. Some of these come from regional differences, like the tradition of ending northern names in "o" and southern names in "i". Others come from inaccuracies in the recording process, which were extremely common in the eras before dictionaries standardized spelling. Some of the spelling variations of Boser are Bosio, Bsio, Bsia, Bso, Bosia, Boso, Bsi, Bosi, Busio, Buosio, Busi, Buosi, Bosich, Bosèlli, Bosèllo, Boselli, Bosello, Bosè, Bose, Bosetti, Bosètti, Bosini, Bosìn, Bosin, Bosinèlli, Bosinelli, Bostti, Bosotti, Bosni, Bosoni, Bosne, Bosone, Bosani, Bosèro, Bosero, Bossa, Bossi and many more.

Prominent among bearers of this family in early times was Iacopo Bosio, a Canavese author and poet born in the 15th century; Tomaso Bosio was a knight in Asti around this time; Giacomo Bosio was a knight in Chivasso around 1544; Tommaso Bosio was Bishop of Modena in 1555; Antonio Bosio (c.1575-1629) was an Italian scholar, the first systematic explorer of subterranean Rome, sometimes known as...
Another 65 words (5 lines of text) are included under the topic Early Boser Notables in all our PDF Extended History products and printed products wherever possible.

In the United States, the name Boser is the 16,243rd most popular surname with an estimated 2,487 people with that name. [2]

Boser migration to the United States +

Some of the first immigrants to cross the Atlantic and come to North America carried the name Boser, or a variant listed above:

Boser Settlers in United States in the 18th Century