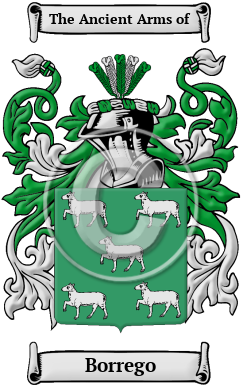 The surname Borrego is of local origin, being one of those surnames based on the name of a place where a man once lived or where he once owned land. The Spanish word "borrego" means "lamb," and the toponym may have indicated a place where lambs grazed.

Early Origins of the Borrego family

The surname Borrego was first found in the kingdom of Galicia, in the northwestern region of the Iberian peninsula.

Early History of the Borrego family

This web page shows only a small excerpt of our Borrego research. Another 93 words (7 lines of text) covering the year 1771 is included under the topic Early Borrego History in all our PDF Extended History products and printed products wherever possible.

More information is included under the topic Early Borrego Notables in all our PDF Extended History products and printed products wherever possible.

In the United States, the name Borrego is the 4,502nd most popular surname with an estimated 7,461 people with that name. [1]

Borrego migration to the United States +

Borrego Settlers in United States in the 19th Century

Borrego Settlers in United States in the 20th Century