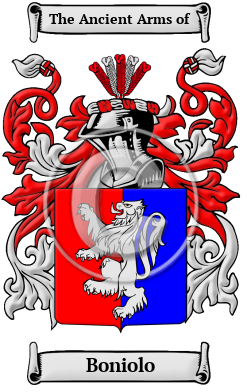 Early Origins of the Boniolo family

The surname Boniolo was first found in the city of Milan, where earliest records are of the Bonacina family in 1220.

Early History of the Boniolo family

This web page shows only a small excerpt of our Boniolo research. More information is included under the topic Early Boniolo History in all our PDF Extended History products and printed products wherever possible.

Italian surnames have a surprising number of forms in comparison with other European surnames because they reflect the regional variations and the many dialects of the Italian language, each of which has its distinctive features. For example, in Northern Italy the most standard Italian surname suffix is "I", whereas in Southern Italy the most typical surname suffix is "O". Sardinian is very different from other forms of Italian and in fact, it is considered to be its own distinct language. Additionally, spelling changes frequently occurred because medieval scribes, church officials, and the bearers of names, spelled names as they sounded rather than according to any specific spelling rules. As a consequence of the major changes in the Italian language and in the local spellings of Italian surnames that occurred over the course of history, there are numerous variations for the surname Boniolo. These spelling variations include Boni, Bono, Bona, Bon, Buono, De Boni, De Bonis, De Bono, De Buono, Del Bono, Della Bona, Del Buono, Di Bono, Lo Bono, Lobono, Lo Buono, Bonelli, Bonello, Boniello, Bonetti, Bonetto, Bonet, Bonini, Bonino, Bonin, Bonucci, Bonuccelli, Bonioli, Boniolo, Bonotti, Boniotti, Boniotto, Bononi, Bonon, Bonacci, Bonaccio, Bonaccini, Bonazzi, Bonazza, Bonassi, Bonassini, Bonassin, Bonassili, Bonaca, Bonaga, Bonaghi, Bonaldi, Bonaldo, Bonaudo, Bonani, Bonandi, Bonardi, Bonati, Bonato, Bonatti, Boneri, Boneschi, Bonacina, Bonico, Bonici, Bonichi, Bonicelli, Bonicco, Bonito, Bonutti and many more.

Prominent among bearers of this family in early times was Bartolomeo Bono (c.1463-1529), a Lombard architect who worked in Venice and designed parts of the Piazza di San Marco; Giacomo Boni (1688-1766), Italian painter of the late-Baroque period, who worked mostly in Genoa. Egidio Boni, born in Cortona in 1350, dedicated his life to the church and eventually became the Bishop of Vicenza; the Boni family of Florence produced 12 priests; Bartolomeo Bonino was Bishop of Sebenco from 1495 to 1512; members of the Bon family in Venice were castle owners during the 15th and 16th centuries; Giovanni Boni...
Another 99 words (7 lines of text) are included under the topic Early Boniolo Notables in all our PDF Extended History products and printed products wherever possible.

Migration of the Boniolo family

Discovered in the immigration and passenger lists were a number of people bearing the name Boniolo: Anna Boni, who arrived in Philadelphia, Pennsylvania in 1767; Maria Bono, age 33, who arrived in America on Aug. 19, 1881, aboard the "Amerique&quot.