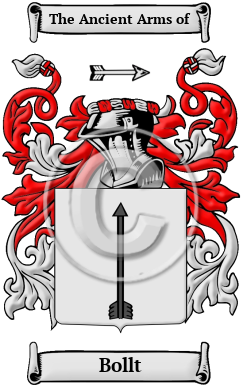 The German state of Prussia, which reached the zenith of its power in the late 19th century, is the glorious birthplace of the distinguished surname Bollt. In the medieval era, after the fall of the Roman Empire, the German lands were inhabited by a variety of Barbarian tribes. The borders of the Barbarian kingdoms changed frequently, but the region that became known as Prussia was roughly divided between the areas of Brandenburg-Prussia, West Prussia, and East Prussia. The colorful history of Brandenburg-Prussia provides a glimpse at the oldest origins of the Bollt family.

Early Origins of the Bollt family

The surname Bollt was first found in Mecklenburg. [1] As seen by the Coat of Arms, the name could have been an occupational name for someone who built bolts or darts.

Around the 1200-1400's some of the family moved from Friesland to Pomerania, where Bolte or Boldeke was a popular personal name. An early record was found in Stettin (Szczecin), West Pomerania in 1344. A few years later, Hans Bolting was listed in 1411 and later again, Joachim Bolte, Mayor of Wolgast, was knighted in 1675 as Bolte von Boltenstern. He was elected by the Swedish King Karl XI in 1675. [2]

His son, Franz Michael von Boltenstern (1657-1716) was a German lawyer and director of the royal Swedish court in Greifswald. He and his wife had ten children including his son, Johann Franz von Boltenstern (1700-1763) who was judge at the court court and at the Wismar high tribunal.

Early History of the Bollt family

This web page shows only a small excerpt of our Bollt research. Another 62 words (4 lines of text) covering the years 1796, 1700, 1763, 1716, 1786 and 1814 are included under the topic Early Bollt History in all our PDF Extended History products and printed products wherever possible.

In the medieval era, many different cultural groups lived in the German states. There are thus many regional variations of German surnames from that era. Westphalians spoke Low German, which is similar to modern Dutch. Many German names carry suffixes that identify where they came from. Others have phrases attached that identify something about the original bearer. Other variations in German names resulted from the fact that medieval scribes worked without the aid of any spelling rules. The spelling variations of the name Bollt include Bolte, Boltt, Boltte, Boldt, Boldte, Bollte, Bolt and many more.

Notable figures of the time with the name Bollt were Carl Gottfried von Bolte, who was a cavalry officer possessing estates in Pomerania. Johann Franz von Boltenstern (1700-1763) was a German lawyer and judge at the Court Court in Greifswald and at the Wismar Higher Tribunal. He was the son of...
Another 50 words (4 lines of text) are included under the topic Early Bollt Notables in all our PDF Extended History products and printed products wherever possible.

Migration of the Bollt family

Since medieval times, the state of Prussia has played an important part in the history of Germany. The state's military powers were historically very strong, and endured until after the Second World War, when the territory was broken up and divided between the Soviet Union, Poland, East Germany and West Germany. A spurt of migration followed, with some Prussians going elsewhere in Europe and many others crossing the ocean to North America. Most entered the United States through Philadelphia. Some remained there, while more moved on to the states of Ohio, Texas, Illinois, California, New York, and Maryland. Others traveled to Canada and settled Ontario and the prairie provinces. Research into the origins of individual families in North America revealed records of the immigration of a number of people bearing the name Bollt or a variant listed above: Amias Bolte, age 23; who settled in Virginia in 1618; F.W. Bolte arrived in Texas in 1847; Henry Bolte settled in Philadelphia in 1871; as did Hermann Loeb Bolt in 1839.