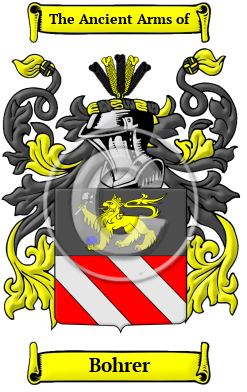 The Danish surname Bohrer has the same entomology as the German / Jewish name Bauer. It was essentially a status surname, meaning either "peasant" or "neighbor." The name came originally from the Middle High German word "bur," referring to a small dwelling or building, which it turn evolved from the Old High German word "buan," meaning "to cultivate."

Spelling variations of this family name include: Bauer, Boere, Boer, Pauer, Bohr and others.

Prominent among bearers of this surname in early times were Caspar Bohrer, born 1744 at Mannheim, trumpeter in the court band who was a remarkable performer on the double-bass; called to Munich in 1778, and died there Nov. 4, 1809. His son and pupil Anton, born at Munich, 1783, learned the violin from Kreutzer, and composition from Winter and Danzi, and became violin-player in the court orchestra at Munich. With his brother Max (born 1785) he undertook in 1810 an extensive tour, ending in Russia, where...
Another 86 words (6 lines of text) are included under the topic Early Bohrer Notables in all our PDF Extended History products and printed products wherever possible.

In the United States, the name Bohrer is the 11,595th most popular surname with an estimated 2,487 people with that name. [1]

Bohrer migration to the United States +

Bohrer Settlers in United States in the 18th Century

Bohrer Settlers in United States in the 19th Century